Cleo’s Wish is a slot designed by Nextgen that has 5 reels and 25 paylines. The reel setup of this slot features ancient Egypt. The game takes its theme from the queen of Egypt Cleopatra. So you can expect the payouts that you will grab according to her wish. This slot can be given a try on any mode of mobile casino.

Betting with Cleopatra in Cleo’s Wish

The betting range of Cleo’s Wish varies from 30p up to £60 for every spin. The symbols of slot include 9, 10, J, K, Q and A playing cards, bracelets, scarab beetles as well as the logo of the gams. The wild here is the Cleopatra which will fetch you 500 coins on landing five of the symbols. It will also replace all the symbols apart from the scatter ones.

There are many bonus features which are activated at random. Sands of Fortune feature will transform bracelet, scarab, ankh symbols and logo into any symbol at random thereby giving you some huge wins. 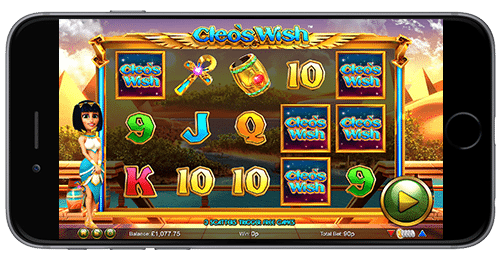 In Cleo’s Parade Free Games, you will see stacked symbols on reel number five which will shift one reel towards left on every free spin. Now if you are lucky enough to grab three more scatters, again a wild stack will appear on the reels. 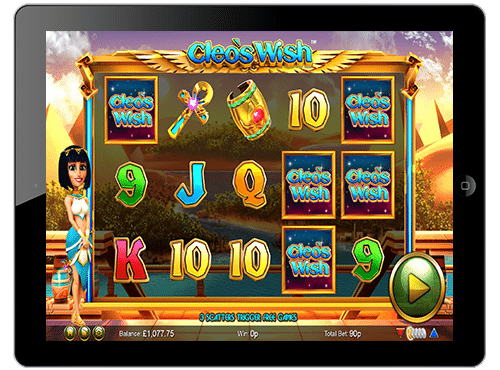 When free spins end, super spins will be determined by Spin Meter and Win Multiplier will determine the multiplier. More Super Spins can also be triggered again.

The graphics are cartoon-styled and a piano soundtrack plays when the reels spin. The slot offers a pretty high variance and the payouts are also very good are the slot features a return to player percentage of 95.15%. Overall, Cleo’s Wish can be checked out once due to its ample bonuses.