You might have already read the novel Alice’s Adventures in Wonderland which is an inspiration for this lovable slot. White rabbit slots is a nice addition to the slots with themes taken from popular novels. The nice bonus features and graphics have made this mobile slots casino a successful slot to date.

Search for the White Rabbit Slots

White Rabbit slots is played with the help of five reels, five rows and a large number of ways to win, however, the number varies depending upon the feature you are in. For the basic gameplay you will be having 16807 ways and in the Extended Reels feature it will go up to 248832.

The symbols are made as per the theme. You will find Queen of Hearts, coloured ornaments, the Cheshire Cat, the Gryphon, the Mad Hatter, the teapot, Tweedledum and Tweedledee and the stack of teacups adorning the reels. Other than this, the common lower valued symbols are designed as 9, 10, J, Q, K, and A. 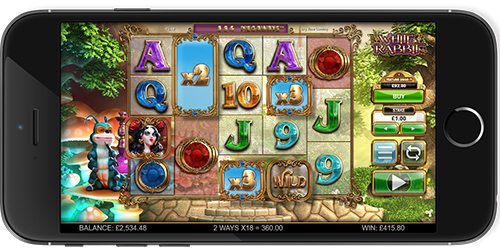 Alice is the wild symbol of the game and she is going to appear on all the reels except the first one. The game also has three scatter symbols and they are depicted as the Cupcake, the White Rabbit scatter, and any Feature Drop symbol. 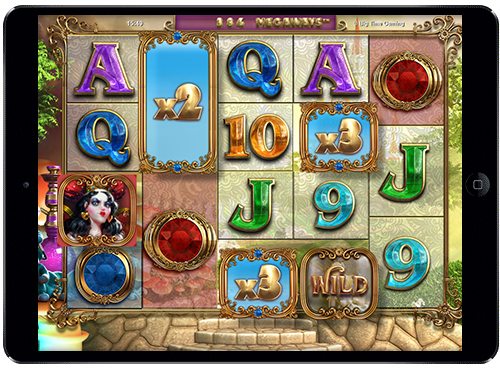 White Rabbit slots has got a Free Spins feature will be triggered when you will land at least three White Rabbit scatter symbols anywhere on the middle reels.You might even choose to buy the feature by using the button which lies below the reels. When the reels expand, you can trigger this feature by up to five times. There is also a Red Queen Feature Drop symbol which drops to form paylines for the players.

After this, you’ll be given fifteen free spins to try your luck. In case a cupcake symbol falls during this round, then it will be split into two random symbols and will increase the number of rows to a maximum of twelve. More spins will be awarded if one reel will have twelve symbols and that particular reel will then become the Queen’s Reel.

Caterpillar Wilds is another randomly occurring feature of the game. It will land a maximum of four extra wilds onto your reels, each awarding you a multiplier of 2x or 3x for any given wins.

White Rabbit slots seems to be a nicely designed slot along with some lovely graphics and a number of events and characters taken directly from the original novel. In case you loved the novel, you will fall for this slot anyway. The bonus features are creatively-designed andif it is your lucky day, you can earn a lot of prizes in this mobile slots casino.