Jungle Jackpots slot game revolves around Mowgli who is the favourite character from the Jungle Book stories. Mowgli, the central character, is often seen swinging on the reels bringing pleasant surprises to the players. The graphics are designed such that it gives a cartoon-like feel to the background as well as the symbols.

Jungle Jackpots comes from Blueprint Gaming, a UK based developer. This firm is a part of Germany’s Gauselmann group. Ever since their inception, they have been into developing many land-based as well as online slots for casinos. However, their land-based slot machines played on over 100,000 terminals are only available in the UK, Italy, and Germany. 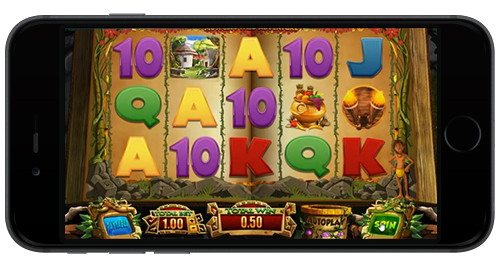 Built over a 5 reel set, Jungle Jackpots gives 20 options to the player as paylines to win. There are many interest-creating factors to this game, as not only Mowgli but many other of his jungle friends also contribute to huge wins like the Baloo’s Mystery prize and Bagheera’s Hot streak. There is an additional bonus feature in which Mowgli chooses the vines with your help to reach an apple tree, and thus the chosen apple reveals a cash prize of up to 1000 times your bet amount. Further to this, you can gamble the earned bonus for even greater wins.

Here, the minimum bet is be 0.20 and the maximum is 500 per spin. The symbols used in the game are its logos, flaming torches, houses, fruit bowls , and wild footprints. The game starts with rustling pages of the Jungle book that occupies the background of the reels. The pages turn and reveal various cartoon symbols or characters from the Mowgli’s stories to yield bonuses to the players. 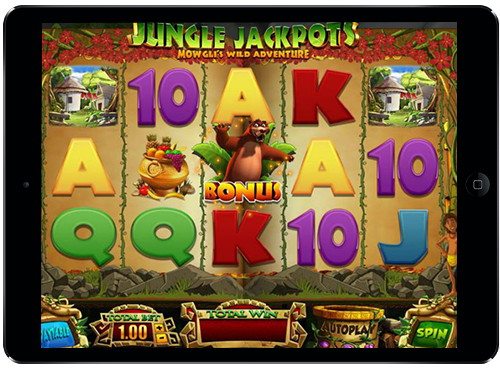 Due to its unique set-up, a fun-filled feel and people being accustomed to the character of Mowgli for many years, the Jungle Jackpots has managed to give Blueprint gaming many appreciations for creating such a game. The whole lot of bonus features have always been the key reason for the craze of any casino game, and Jungle Jackpots has thus been very successful in being up to the mark on both these grounds.