The slot game Mega Moolah by Microgaming graphic designers has won huge applaud in the gaming market. The game jostles your imagination by bringing you in a tropical jungle with animals helping you fill up your pockets. Yes, the monkeys, being the scatter of Mega Moolah are not snatching away your edibles here; they are just making you earn huge amounts of money.

Headquartered at the Isle of Man, being into the business, since 1994, from 22 long years, the developer is continuously mesmerising the casino players worldwide. With the introduction of online slots with which the players can play casino games on their smartphones and hence the increasing revenue, Microgaming has left no rock unmoved in coming out with ever so different creative ideas for creating such slot games. 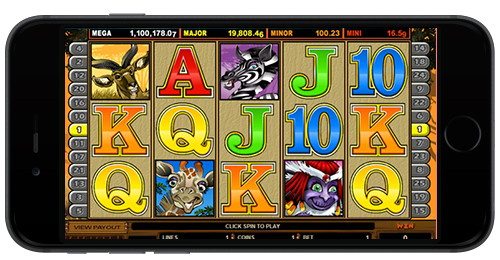 You need not give a second thought of being the part of the greenery in the animal kingdom of Mega Moolah. The game has 5 reels and 25 paylines. The 2,3,or 4 wild symbol of the lion aid in providing 15, 125 and 1500 coins respectively. The minimum bet is 1 and the maximum bet is 125 coins.

Az symbols of antelopes, striped zebras, huge elephants, water buffaloes, and yellow giraffes distinctly set the atmosphere of the game. There are also some of the playing cards’ symbols from Nine to Ace used as other symbols of the game. 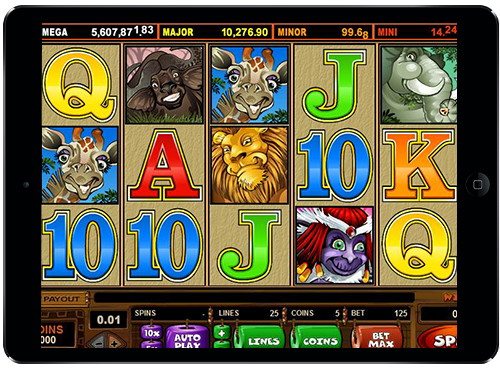 Mega Moolah also gives you a 15 free spins bonus when 3 scatters appear on a payline. The free spins feature is re-triggerable. If a winning line if formed during these free spins, the payout gets tripled.

If the wild symbol of the lion appears in any of the winning combination, the win amount gets doubled. There is also a mega bonus available in the game and this is obtained through spinning a simple wheel of fortune deciding your mega jackpot.

Mega Moolah, being the work of Microgaming developers also makes you available a whole range of progressive jackpot options by which you can do nothing but earn. This is the reason for it becoming one of the very admired and loved slots in the gambling market. The jackpots and the features of the game are designed for all sorts of players such that it has something to offer to almost everybody.