The mighty warrior from the ancient world is the star of the ‘King of Macedonia’, a new exciting slot developed by IGT. This slot game is inspired by one of the most famous rulers Alexander the Great and is quite easily accessible across all devices. It has a moderate volatility and one can squeeze a maximum jackpot of 200 coins during their gameplay. This slot game has an RTP of 95.03%.

Meet The King In King of Macedonia Slots!!

King of Macedonia Slots is beautifully designed with 5 reels and 40 active fixed paylines, and the background of the reels is well portrayed against a hillside palace. Like all slots, players must hit at least 3 identical icons in a row to form high-winning combos, though the high-rewarding icons will reward small cash prizes as long as the players land them at least 2 in a row. 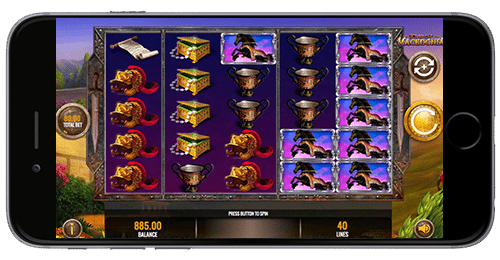 The symbols of this Mobile Slots casino game represent a large variety of things that might have been found in the ancient world. The players can win small cash prizes from lutes, scrolls, bowls, urns, military helmets, and jewellery boxes. Whereas, larger wins can be achieved from horses or the portrait of a beautiful woman. The latter can reward the players with payouts of 600 coins if the players land five in the row on the same payline. The players can play this slot game with a minimum value of 80p and a maximum value of £1,600 per spin.

King of Macedonia slots is recognised as the wild icon of this Mobile Slots casino game. This icon can replace all other icons except for the shield scatter bonus icon. 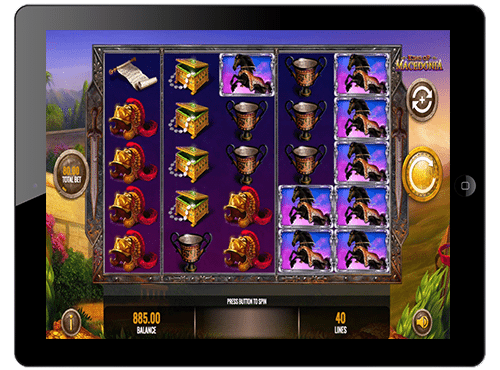 The players must look out for Bonus shield scatter icon. Obtaining this symbol on reel one along with Gigantic Wilds on the reels will apply a random multiplier to your winnings which range from 2x to 10x. This feature is recognised as Random Wild Multiplier round.

The main attraction this slot game is King Free Spins feature that is activated when Bonus shield scatter icon lands on the reel one and the Gigantic Wild occurs on either reel two or four. After which, the players will be rewarded with 8 free spins and if any wild icon appears on any reel position during this time, it will remain locked in its place until the entire duration of this feature.

King of Macedonia Slots is one of the best slot game developed by IGT. It has a smooth interface and enthralling bonus features which offer frequent handsome payouts.