ദി Finn and the Swirly Spin Slots is a new unique slot developed by Netent. This slot game will transport the players to the emerald isle where you will find the magical leprechaun called the Finn playing Irish tunings on his flute. This Irish-design mobile slots casino has a very different reel outlay and is designed with a 5×5 grid along with 25 spaces

The Finn and the Swirly Spin Slots is payable from a minimum value of £0.10 to a maximum value of £200.00 per spin. However, this slot game has low variance and a return to player percentage of 96.61%. Created with well-crafted icons, it comes with nuts, rubies, hearts, horseshoes, spades, and clovers. Also, the key icon is recognised as the scatter icon and the wild icon is the smiling yellow star which is formed when a winning combination gets exploded during any spin. 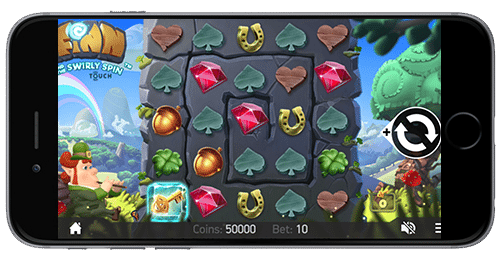 In this slot game, the wins which include the wilds are different from those which don’t i.e when a wild icon form a part of winning combo, then it will get explode and smash all icons that are horizontally and vertically adjacent to it. Whereas, if any win does not involve any wild, then the new wild icons will occur in place of icons which get vanished after the win. 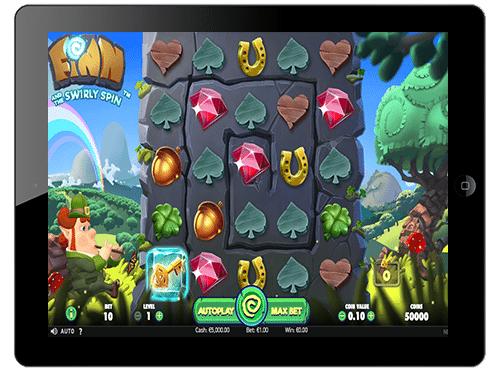 Base Game Features Of Finn and the Swirly Spin Slots

There are four randomly activated base game rounds on Finn and the Swirly Spin Slots.

Activating bonus on Finn and the Swirly Spin Slots is very much different from other slots. In this round, the players are required to take key scatter icon towards the middle of the screen and they can do so by achieving consecutive wins, that will remove the icons in front of the key and will allow for scatter to move towards the middle of the screen. By doing so, players can activate four different bonus rounds which offer some handsome amounts to the players.

Finn and the Swirly Spin Slots has exciting gameplay which greatly attracts players towards this mobile slots casino. It involves many entertaining as well as rewarding bonus features. Thus, this slot is definitely worthy a check out.