Foxin’ Wins- A Very Foxin’ slots has come up to enlighten your Christmas this year. This Mobile Slots casino has been launched by NextGen along with multiple bonus features out of which the SuperBet feature is known to be the player’s all time favourite.

Foxin’ Wins- A Very Foxin’ Christmas slots comes as a 5 reels and 25 payline slot. The minimum available bet is of 25p per spin.Just like its title, the game has been given a festive feel which is supported with a jolly soundtrack. Basically, you will be taken into Fox’s home which has the sparkling Christmas tree along with lovely lighting in the surroundings. Card values A, K, Q, J, 10, and 9 make up the lower-valued symbols along with wads of cash, snow globes, Christmas trees, and sports cars as the higher-valued symbols.

Fox in a Christmas hat is going to be the wild symbol and it will replace all symbols except the scatter symbol. Fox Pup is a randomly occurring feature which will appear inside any reel and will turn that symbol into wild. 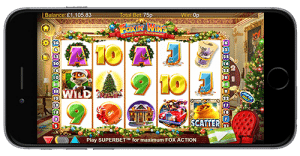 Another is SuperBet Level 1, which is from 35p to £875 and for this one, the Fox Pup will appear on the 3 middle reels.

The last one is SuperBet Level 2 and in this the betting range lies from 50p to £1,250 per spin. Out here, the Fox Pup will appear on all 5 reels.

Apart from this, a randomly occurring bonus feature is also there which is known as Leprechaun Shakedown. It will treat you with random cash prizes to make your game a bit more interesting.

The Free Games feature is also there and you can play it whenever 3 or more golden pot scatter symbols will land on any of the reels. This will award you with 10 free spins. During this feature, all your wins will receive a 2x multiplier.

Overall, Foxin’ Wins- A Very Foxin’ Christmas slots is a lovable Mobile Slots casino which will keep you stick to its reel for a long time. Multiple bonus features topped with a festive look and feel have together made it a successful slot with a strong fans’ queue.