Hidden Slot is a new adventure-themed slot game launched by Elk Studios. This slot game has some funky lively characters on the reels including a professor who will accompany you on your way to the hidden treasure.

This slot is accessible to all Android users, PCs, tablets and is quite easily accessible for most slot players. This slot game has a healthy return to player percentage of 96.30%.

Hidden Slots is classically built with five reels, four rows and also offers 178 ways to achieve a win; and the background of the reels is occupied by pyramids along with 2 beautiful beaten up Anubis statues sculpture guard. The slot players can play this game with a minimum bet of 20p and a maximum bet of £100.00 per spin. 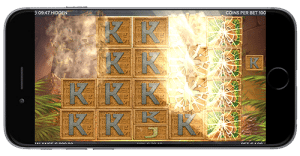 The symbols in this Mobile Slots casino is very well-crafted and include playing cards as lower values i.e K, Q, A, J, and ten. Whereas the other 4 higher value icons include head of Sphynx, menacingly grinning camel, a young boy along with ginger hair, the kooky scientist wearing the odd machine on his head

This slots logo is recognised as the Wild icon which, however, doesn’t offer any payouts. This icon can occur in any position on 5 reels and is also one of the most dynamic icons in this slot game. It can replace any other symbols except for the magnifying glass icon.

The magnifying glass is recognised as the scatter icon of this slot game. Just like the Wild icon, it doesn’t possess any real value but can help to activate the free spins round if players land at least three of them. After which, they will be granted with five free spins. Before the players begin with free spins, 1 symbol will get randomly selected so as to become the expanding icon i.e when the icon lands on screen it will expand so as to cover the entire square of 4 positions. Also, whenever it occurs, the rest of icons will disappear for making room for other icons to fall in that place and increasing the chance of another expanding icon. The players must try to land more of scatters during this feature so as to win extra freespins. 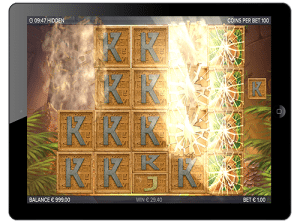 Flashback Respins feature gets randomly activated during any base game round. After which, the players will view the clouds and sky come moving all over the screen giving the impression of an ancient Egypt – and the players are awarded three free re-spins along with one, two or three of central reels entirely covered with sticky wild symbols.

The Hidden Slots is one of the finest Mobile Slots casino developed by ELK Studios. It has high rewarding symbols along with exciting gameplay and can be considered as the perfect treat for players. It has high volatility and one can earn a huge amount by playing it cleverly.