HAMMER ON WITH JACK HAMMER 2

Jack Hammer 2 is the sequel of the Epic Jack hammer slot game. In this slot game we see our favourite characters in yet another exploit in the underworld. In this online slot game private eye faces off with Don Crabby. The game opens with a brief animated sequence that shows the characters involved. The game is set in a night time theme with the Grand City Bridge in the background. The people who appear on the reels are the sane people from the introduction. Private eye, Don Crabby and gorgeous Pearl are all set to give you a huge win.

COMIC BASED ANIMATIONS AND INTRIGUING SOUNDS

Being set in the Underworld one can expect quite a lot of gunshots. But in this game we hear soft thudding, faint bird calls, and even water splashing along the docks. The game features excellent animated scenes which are a real treat to the eyes. Jack Hammer 2 has an interesting theme going on in the background. What the theme is,is something for you to find out! 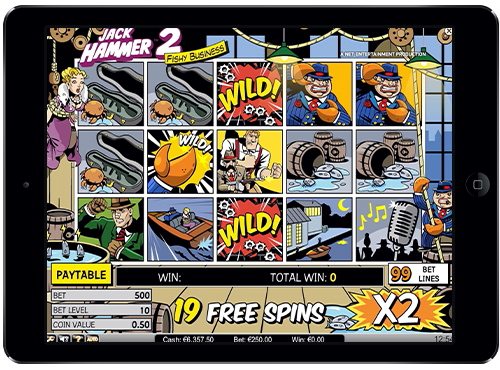 Jack hammer 2 is a 3 row, 15 separate reels and 99 paylines game! As if this does not make things interesting enough, the game also features a large number of wilds, scatters and even sticky wins. Though the wild symbol only comes only in reels 2, 3, 4 and 5 it still has the potential to turn things in your favour. 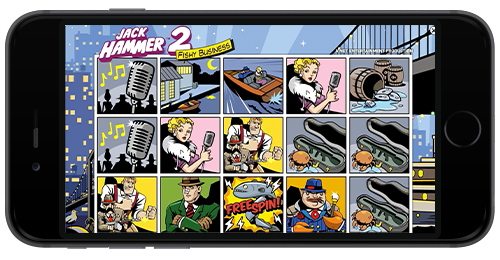 Jack Hammer 2 is in every way the right sequel for the Jack Hammer slot game. Not only does the game have rich animation and sound effects with an excellent plot set, it also features some excellent combinations of features that is guaranteed to make you home with a contented heart and a filled up wallet!