NetEnt Gaming is celebrating its 20th birthday and it is introducing some new and feature-rich online mobile slots in NetEnt Rock series. Guns N Roses got a huge response from the players and now is the time to check out Jimi Hendrix, the brand new slot game developed by NetEnt Gaming.

This amazing mobile slot game is releasing on 22nd April, 2016. It is an incredible game by NetEnt dedicated to a great musician of 1960s. Yes, we are talking about none other than the legendary musician Jimi Hendrix. This game has eye-catching graphics, luring bonus features and the best soundtracks of Jimi Hendrix. Let’s discover some more facts about this fantastic cash entertainment game.

Game’s theme and game-play is revealed:

Jimi Hendrix slot will be a 5×3 reel slot game with 20 fixed bet lines. This game will give you a perfect platform to play with multiple free spin features. Players can pick the best mode to win a greater amount. In addition, there are two new bonus features introduced by NetEnt to elevate player interest in the game.

The theme is impressive because it looks like 60s’ retro style theme. Purple and pink colored background, high-class 3D graphics and Jimi Hendrix’s famous soundtracks make this game super exciting. The symbols are perfectly designed for the theme; they include white guitars, red guitars, Jimi Hendrix, flowers, peace signs and hearts. All of them are high-value symbols, which you must land during each spin to win some big credits. 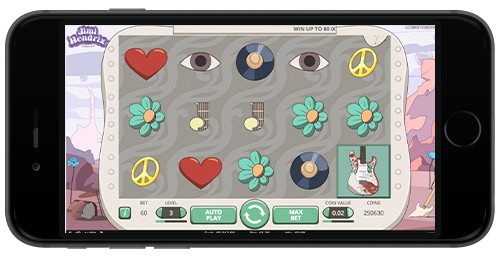 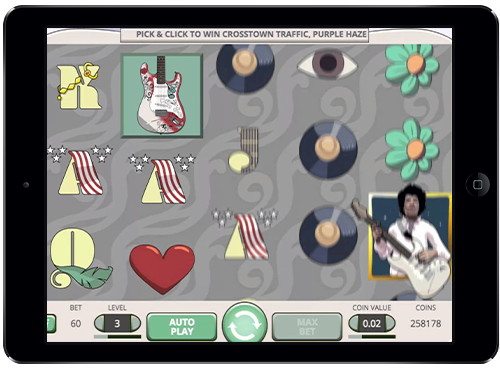 The wild symbol can land in any reel and once it lands, it can substitute all the remaining symbols with a wild symbol. Consequently, the player gets a better winning sequence for a bigger win. But this game has a twist. Landing four or more red guitars can be quite cool because thus you can win some re-spins. The stacked guitars will become sticky and other symbols of the reel will spin. You can get a better sequence of symbols to win the utmost prize of this game.

It has a theoretical RTP of 96.1%. With so many twists in the game play, players can keep their interest heightened. The Rock series has already delivered an awesome game, Guns N Roses. And Jimi Hendrix is going to be bigger and better !