Planet of the Apes

Planet of the Apes is a new wonderful slot game introduced by NetEnt. This slot is beautifully designed with 5 reels, 3 rows and 20 fixed paylines; and those dual reels depict different parts of the life of Caesar the leader of the ape army before his escape from captivity. This slot game can be played on all mobiles, PCs and tablets which makes it quite easily accessible for all players. You get an RTP of 95.23% in this online video slot.

Planet of the Apes Gameplay

This Planet of the Apes slot game has high-definition graphics along with synthesiser soundtrack. The reels are beautifully placed against a wonderful scenario and the left set of reels is recognised as ‘Rise’ which consists of icons such as Caesar, 3 characters from the Rise of Planet of Apes and then playing card icons. Whereas, the right set of reels is recognised as ‘Dawn’ and the symbols include Caesar, 3 characters from Dawn Planet of Apes and also playing card icons. 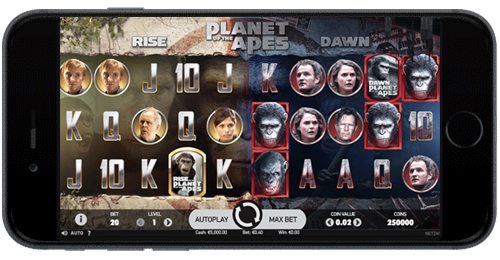 There is a very high possibility of occurrence of these bonus features in Planet of the Apes and this is one of the most interesting parts of the gameplay which also offers some handsome payouts.

If the full stack of wilds cover an entire reel in the Rise area, then it will get copied to the corresponding reel in the Dawn reels set. 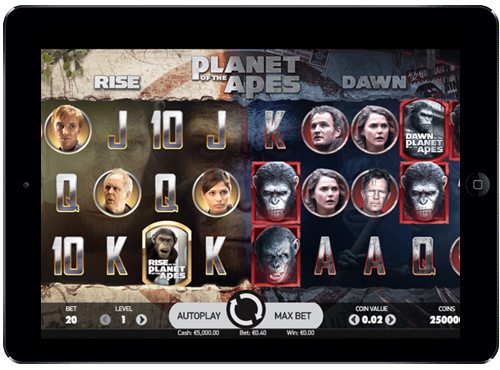 There are 2 free spin rounds and they get activated by the landing of 3 scatters on the Dawn reel or 3 on Rise reel.

Dawn Free Spins – this feature rewards 15 free spins on the set of reels along with 3 additional flaming icons.

ദി Planet of the Apes is turning out to be one of the finest games developed by NetEnt. It has a smooth gameplay along with exciting bonus features.