Keeping every feature similar to the Da Vinci Diamonds, IGT has created yet another slot game for the slot players. IGTs think tank has thus managed to assemble sufficient profits for the company through Da Vinci Diamonds Dual Play. Both the games are created on the theme of medieval art. Diamonds and jewel stones thus creatively adorn the reels of the game including the symbol depicting Leonardo Da Vinci – the greatest artist, writer, painter and sculptor of the medieval times.

IGT has been involved since 2006 in the development of software for many online and casino slot games. The developers keep a close eye in maintaining the graphic quality and the colour scheme of their games. This is done to ensure that the games are elegant to look. This is the reason for the red and green background used for Da Vinci Diamonds Dual Play. 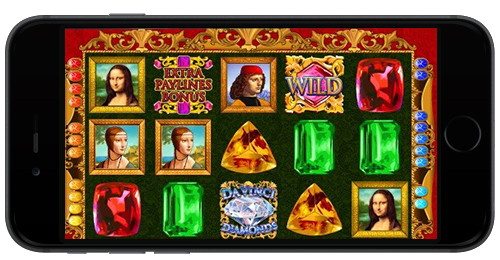 Da Vinci Diamonds Dual Play has 2 reel sets to play, one over the other. Also, the paylines are doubled to 40 as compared to 20 in the earlier Da Vinci Diamonds slot based on the same theme. The wild has the power to replace all the symbols in the game except the bonus symbol. The Bonus symbol of the game is the Extra Payline Symbol. Leonardo’s and his famous painting Mona Lisa also form symbols of the game. 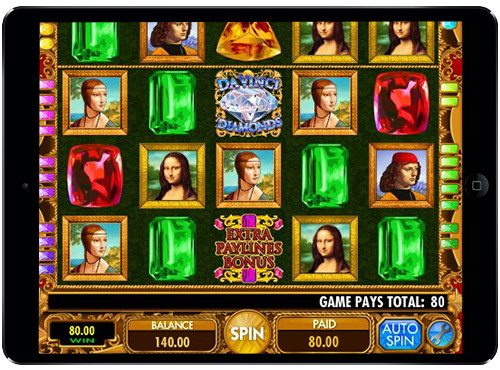 The game also possesses a tumbling reels feature through which you can earn huge wins. Through this, as the winning payline is formed and reels disappear, the symbols or the entire reels from the top row tumbles down in its place. Thus, one can again obtain winning payline. The game rests until no new winning combinations are formed.

IGT has rightly banked on Da Vinci Diamonds Dual Play as it was a sequel to the original game. It readily caught the attention of players merely due to this reason as the concept is not very popular in slot games. The greater number of paylines ensures a greater payout to the players but of course, the volatility of the game is high. You can check out our Da Vinci Diamonds slot review here!