CHASE DOWN YOUR RICHES WITH THE INVISIBLE MAN

If wild chases and adventure topped up with a little bit of mystery and suspense gets you excited, then The Invisible Man would be a game you can consider playing. Made up in a collaborative effort by Netent and Universal studios, the game is slot game realization of the famous film titled the same as the game name. Though the only thing you had to do in the movie was sit and watch, here you need to do a lot more than that.

The game is rich with features. Infact, rich would just be an understatement! With wilds, free spins and even bonus games distributed across the game, it is guaranteed to keep your eyes glued to the play screen. Netent has done everything possible with for a slot game, keeping it intriguing with the plot, features, animations and sound effects. 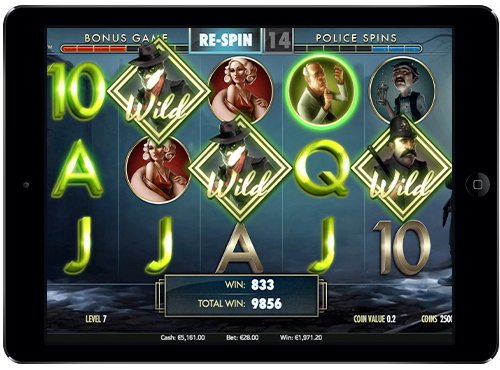 The game is all about chasing down Griffin, the naughty Invisible man. The game is stacked with features which can not only help you track him down, but also make you rich! With win both ways, wilds, free spins and 2 bonus games everything is qu set once you get gaming!

The win both ways feature counts your paylines in both ways. The Invisible Man is a 20 payline game. But the win both ways makes it a 40 payline game in essence! The game features not one but 2 wilds! The police wild and the Griffin wild come on reel 1 and 5 respectively. Not only do they trigger free 5 spins but they also move to the opposite end one reel at a time for every spin! The game also has free spin features which get triggered when both wilds come simultaneously rewarding you with 10 free spins. The free spins also get you a step closer to the bonus games.

There are 2 bonus games in The Invisible man. While the Griffin’s rage bonus game is divided into three stages, it is a simple pick and click game. Here you can either find coin wins, multipliers or an end game symbol. The police free spin bonus game gives you 3 free spins with 5 burning wilds pre placed in the 5 reels.

With interesting plots, rich animations and sound effects The Invisible Man is a game that rewards its players. With a payout percentage of 96.4% the game has quite a lot of well distributed features. The bonus games certainly ups the factor of thrill and suspense as anything can happen in them. Though there are high risks in the game, its developers have certainly done their part in making sure you don’t go home with nothing!