Werewolf wild slot comes from the house of Aristrocrat Games. They are the makers of several other slot games like Wild Panda, Big Ben, Red Baron and many more. This game is one of their most played games and here is a short review of Werewolf wild slot.

Unlike the previous games from Aristrocrat, this game has been upgraded a lot from the previous generations. The games has cool new graphics and sounds. The game is set around a 19th or 20th century London. Even though the graphics of the game is not up to the mark, comparing it with the other slot games, it is an overhaul compared to previous Aristrocrat games. The play icons that are available In Werewolf wild slot are policeman, werewolf, carriage, gold coin, woman and lamp. The icons are a perfect match for the interface and it looks great. 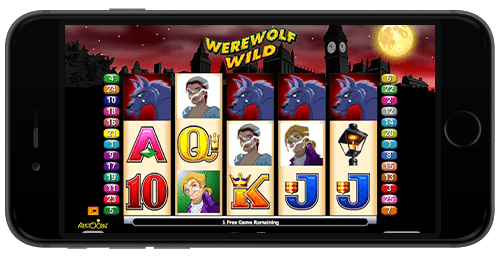 The slot has a total of 25 paylines and the least amount for wagering is 0.50$ and it can go up to 100$. If a player gets five of a kind on a spin, they are entitled to win 1000 coins. This is pretty low comparing it to other slot games. The most striking feature of Werewolf wild slot is the number of free spins.

If a player gets three werewolf scatters on the reels in any order, they are entitled to 7 free spins. If they get 4, they get 14 free spins and for 5, they get a whopping 28 free spins. The Wild does not have any multiplying capability, but can only be used to transform symbols into werewolves. This feature might not prove to be useful at first, but can turn out to be a game changer. If a werewolf appears next to a person, that will also get converted to a werewolf. It is more like a wild card in scratch card games, wherein the player can use wildcards for creating a winning combination. 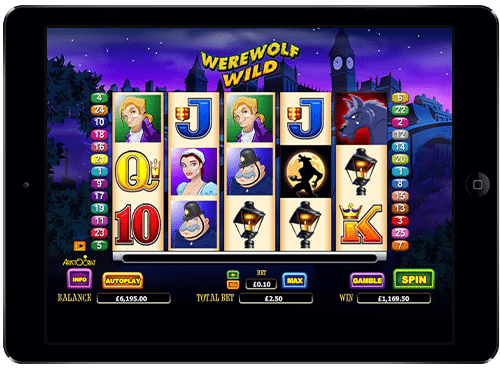 Werewolf Wild Slot has two other little features called Claw Swipe and Mystery Coin. In Claw swipe the players are allowed to convert any symbols on the reels to Wild. This feature rarely brings any wins to the table and is not very popular. Mystery Coin, as the name suggests, involves getting a special Gold coin symbol on the first reel. On achieving this the players are entitled to bonus which ranges from x2 to x40 times the total bet prize.